In Australia, the at-need arrangement market was the largest segment of the death care services market accounting for 88.1 percent of the total in 2020.

However the pre-need segment is expected to outpace at-need and grow at a Compound Annual Growth Rate (CAGR) of 8.4 percent during 2020-2025 according to findings released in the Business Research Company Death Care Services Australia Market Report 2021.

The report claims that given the gene­rally high costs of conducting funerals, people especially in developed count­ries, are increasingly investing in funeral plans to select a funeral service that will meet the emotional and financial needs of their family.

In Australia, a recent report by NSW Cemeteries and Crematoria found that prepaid funerals are still a small propor­tion of the market. According to figures, 59 percent of survey respondents had not pre-paid for their funeral; 14 percent of people plan to pre-pay and only 5 percent had already done so. 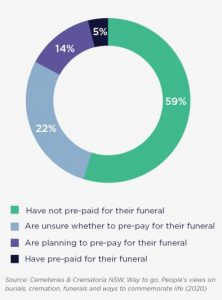 Cemeteries & Crematoria NSW, Way to Go, People’s views on burials, cremati­on, funerals and ways to commemorate life also found, that 62 percent of those surveyed had never made funeral plans for others, yet the biggest predictor in making plans for after-death is the ex­perience of having a family member or close friend die, or planning a funeral for a relative or friend. People who had these experiences were more likely to have then made plans for their own de­ath.

Peter Hall, Preneed Specialist from Be­thel Funerals in Melbourne, says inqui­ries about prepaids are picking up, but because there were no face-to-face meeting opportunities in 2020, num­bers dropped.

He believes from a family’s perspective that a prepaid funeral is fantastic as it locks prices in and provides for us guaran­teed future work.

Julie Spriggs, Preneed Specialist at Kings Funerals claims that Geelong, where the company is based, has among the highest number per capita of prepaid/preneed funerals. “That’s because I think prepaid funerals sell them­selves by word of mouth. It’s people telling each other, family and friends,” she says.

According to Julie, most preneed funeral sales are to people aged over 65. “We see one or two people under 60, but they are super-organised,” she explains.

While for many people seeking advice about funerals is a process that starts by recognising their own mortality, Stacey Hewson, Funeral Director and Preplan Consultant, from Seasons Funerals in Perth has noticed something different.

She’s been surprised by the number of younger people under 30s, who are want­ing to put money away towards their funerals. She admits most of her clients are older, but has seen about 10 who are younger in the last 12-18 months.

While at first she was concerned the younger people were unwell, (inquiring be­ing a taboo industry question), as the reason for their interest. “But they just want to plan for the future. I think people see the funeral bonds as a good way of in­vesting money and about taking care of themselves,” she explains.

With an aging population and a greater recognition of our own mortality following the COVID scare in Australia, funeral firms who recognise the strategic advantage of pre-need are well placed to take advantage of this evolving market as it grows.